It’s that wonderful… scratch that.  It’s THAT time of year.  Fellow SLP, you know what I’m talking about.  The craziness of busy schedules, the chaos, the KIDS! Kids have a 6th sense when it comes to the holidays.  Even if they can’t read a calendar, they know!  Many parents use “Elf on the Shelf” to help with behavior at home.  I know some teachers use them for the same purpose.  It got me thinking, “How could a home-based SLP use this concept?”  The elf creeps me out first.  Second, you’re not allowed to touch it…which completely does not work for me.  Third, I have families that celebrate Christmas in a more traditional way…you know without a Santa.  Then BOOM…the speech penguin was born!  You could easily use this idea as a teletherapist or school based SLP.  Your reward system might have to be a little different if you are a teletherapy SLP. 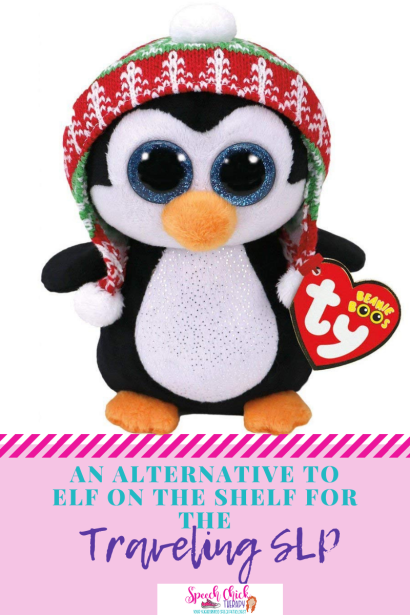 I found Penelope at Michael’s last year.  She works perfect!  I picked a penguin but, really you could use any animal.  I chose the penguin because she had a “Christmas-y’ hat.  But now I have figured out she’s PERFECT to make return visits after Christmas!   Penelope can remind kids how to behave after the holidays.  I can use her to re-establish routines and reward good behavior.  With the Elf, it leaves with Santa.  Penelope can pop up through January and February to keep tabs on good behavior.  After winter, she can pass the behavior baton over to a leprechaun or even Maggie, my magical unicorn.

Setting Up the Character for the Home Based SLP

So how do we get this set up and going?  Well, first introduce your new friend.  Tell the kiddos she/he will be visiting for a while to make sure they are doing their absolute best in speech.  The new friend can be touched (unlike the elf) but you have to ask her/his permission first.  She does not like to be touched so that is why we must ask first.  Penelope does like to play games from time to time, so we can always ask her to play.  But her favorite thing is to sit and watch!  She loves to listen to you use your good sounds and try your best!  Penelope does carry her own bag of prizes.  If she feels like you have done a REALLY good job, she will let you pick from her bag of goodies.

However, if you make bad choices, she doesn’t like that.  Bad choices mean no prize from Penelope.  That’s pretty much how I set up the system.  Sometimes, I had to remind the kids that she did not like to be touched.  She usually was peeking out of my bag so that she could watch.  At the end of each session, I would “ask” Penelope what she thought about the child’s behavior.  She would “whisper” her answer into my ear.

I did not get too crazy with prizes.  Most of the prizes came from the local Dollar store.  Typically, my only prize is a sticker or stamp.  Penelope had rings, pencils, erasers, and toward the end of the month- mini tubs of Playdoh!  I made a little bag from some scrap fabric and hot glue last year.  You could also just a use a pencil bag which I think I am switching to this year.  The kids were also told they could not ask or look in her bag.  What they picked out of it was what they got!  No take backs.

Who Did I Use This With?

Not all of my caseload met Penelope.  I used her with mostly preschool and up.  Clients that understood the rules with Penelope were the best ones.  My toddler caseload just saw her as another toy in my bag so that did not work out well.  If I forgot to take her out or ask if she thought the child earned a prize, I was quickly reminded!  This year, I think I will also make a visual reminder of some sort to remind the kids how they are doing.  I am still working out the details of it so I did not post it yet.

Tell the kids that Penelope has a bonus object in her bag today.  “When she was packing her bag this morning, she really wanted to show you this object she was so cool” is the story you can tell the kids.  But tell them, they have to guess what it is based on the clues you give them.  This would a crazy fun describing game to start or end therapy! Give clues until the child is able to tell you what it is.  Then reveal the object and review the clues to make sure it matches all of the clues given.

Have fun with it and don’t get too stressed!  The best part is you do not have to worry about moving it everyday!!!

Want to do a complete penguin theme?  Here you go!

What Are You Looking For?