If you are wanting another “cheap ideas” post for speech therapy, you are in luck!  Today, I am bringing you some cheap ideas to do during an ice cream theme! (You can read my theme review here.)  You can use these to address articulation or language.  I try my best to keep them open ended.  All (or at least most) of the materials you can pick up at the Dollar Tree.

This idea ended up being a bigger hit than I thought!  I spent a total of $2 on a popsicle maker and a bag of beads.  Make sure the bag had the colors of my popsicle maker.  I chose one with bright colors like pink and lime green.  It worked great!  I started the activity by placing a bead in each compartment.  They had to find matching beads and put them in the correct spot.  Easy enough!  We worked on colors, increasing MLU and early category skills.  Each time the child found a bead, he could tell me the color or use a phrase such as “I see a {pink} bead.”  If they chose a bead that did not belong, we would talk about it.  “Is that bead green like the others?” might be a question I asked.

I used this next activity to work on quantity, counting, following directions and colors.  Since many of my little ones have difficulty counting to 5, I only worked on numbers 1-5.  You could go up to 10 if you needed.  I set the ice cream cones (brown triangles with numbers written on them) out first.  In the container are different colored pompoms.  I made sure to have enough to meet each number.  So at least 5 of each color.  Then I gave a direction such as “Find 1 pink ice cream scoop.”  I waited for the child to find one pink pompom and place it on the first cone.  Then we talked about the next number and he was given another direction.  We continued until all 5 cones had matching ice cream scoops.

I used this activity for my language clients and fluency clients.  They both loved it!  I had a pack of bright colored paper and popsicle sticks. Then I cut the shape of a popsicle out of the paper.  Make sure to cut two so that each child has a front and back side of the popsicle.  The client had to make a request for their desired color of popsicle stick and the designs.  I had squares, circles and lines cut from assorted colors of paper.  Each time the child wanted a shape, he had to ask a question as well as using the describing word (in this case, a color word) in the correct place in the question.  “Can I have a pink circle?” might be asked in order to receive a pink circle.  All the shapes were glued onto the popsicle.  Once completely decorated, the two sides were glued together with  the stick in between.  After it was complete, we worked on describing the popsicle the child had just made.  Fluency kiddos had the same job but they had to complete each task with smooth speech.

This idea is very similar to ice cream pompoms above.  However, instead of numbers on the cones, I wrote target words.  The child said a word correctly 5x, then placed an ice cream scoop on that cone.  You could easily turn this into an art project.  Take piece of construction paper and turn it lengthwise.  Glue the cones at the bottom of the paper.  Glue a pompom (ice cream scoop) each time the child says a word correctly 5x.  Then send it home for extra practice!

Now you have several fun ideas for your speech therapy sessions this summer!  Ice cream is the perfect theme for the summer.

You can also check out my articulation packet for ice cream week here! 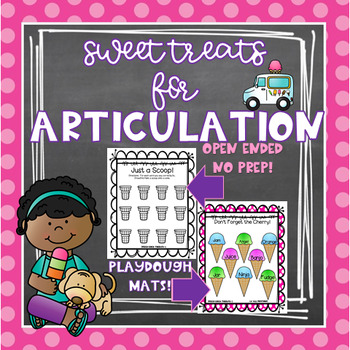 What Are You Looking For?

💜EMPOWERED WOMEN EMPOWER WOMEN💜⠀⠀⠀⠀⠀⠀⠀⠀⠀
Have I mentioned how much I love super simple crafts? My clients are finishing up our winter theme by talking about penguins!!! "Little Penguins" by Cynthia Rylant is great book to use with little ones in speech therapy. Short text with pictures that tell more than the words do are amazing books for language as well as structured articulation. We paired it with a simple craft {that just happens to be in my free resource library!) We've used this craft for articulation AND language targets...one craft that addresses ALL THE THINGS=PERFECTION!!!⠀⠀⠀⠀⠀⠀⠀⠀⠀
Ok, I hear you. It's January the 74th and you have run out of ideas and activities for the month. (Am I right? January is the month that never ends!) You've read all the snow books and you just need a little something to get to February, hearts and candy!
If you ever wanted to know what it's like to work with this kids...this exchange I had this morning should give you some insight.🤦‍♀️🤣
May your Monday be filled with frosting🧁 and rainbows🌈! 😘⠀⠀⠀⠀⠀⠀⠀⠀⠀
Please tell me I am not the only one... In my defense, his mother thought the same thing. I promise I am mostly a decent SLP🤣but apparently I have my moments.⠀⠀⠀⠀⠀⠀⠀⠀⠀